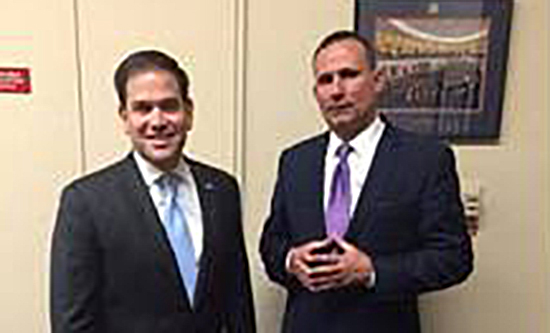 For several days, the Miami anti-Cuban mafia (represented by Marco Rubio and Mario Díaz-Balart), the American Embassy in Havana, the US State Department and his OAS’ henchman, Luis Almagro, have been distorting the reasons why José Daniel Ferrer has been imprisoned, alleging in their persistent defamation against Cuba, that he was arrested for been a "political opponent".

Although his defenders try to present the facts as another "violation of human rights" by the "regime," the self-proclaimed leader of the counter-revolutionary organization Patriotic Union of Cuba (UNPACU), has been in prison since October 1th, precisely not for political reasons but for his repeated offences (or recidivist acts) as a camorrist and a gang member.

The Cuban website, Santiago Arde argued "If someone is wondering why he was finally imprisoned, here is the answer: last September 20th, Ferrer García with the support of another three of his "henchmen" beat Sergio García González from Holguin for alleged suspicions against him ".

As a result of the physical aggression, the victim of Ferrer's "democratic" methods had to be admitted to the intensive care ward of the Mayarí Abajo Municipality Hospital in Holguin, with serious injuries.

In the violent act were also involved: Roilán Zarraga Ferrer, cousin of José Daniel Ferrer, who served the penalty for robbery with force in an inhabited house; Fernando González Vaillant, (alias Chichi), who also served a penalty for robbery in an inhabited house and for the crime of raping a minor, and José Pupo Chaveco (alias El Vaquerito) sanctioned for theft. El Vaquerito also was a patient of the Care Center of Mentally (chronically) ill patients known as El Viso, an institution from which he escaped to reside in Ferrer's home.

The local website Santiago Arde described the facts stating: “As it has been shown, Ferrer García not only manipulates and uses criminals to lead acts of violence, he also uses mentally ill patients. It is not the first time that the "chief " of the UNPACU leads acts of violence against his own followers, who until now had not denounced him for fear of reprisals”.

The original article written (see the article in Spanish) by M.H. Lagarde includes the chronology of violent acts of the offender José Daniel Ferrer